High Dining with OLIVER CORTEZ, the executive chef up in the Gold Coast Hinterland.

Oliver aspires to turn Peppers in 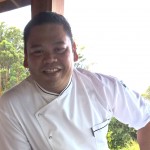 to an exclusive Dining Destination.  And there is no doubt he has the drive and experience to do just that. After all,  he can show a long string of achievements and awards, inclusive a chef hat award at Versace’s.

Oliver has worked at  some of the most prestigious  five-star Hotels, e.g. the Holiday Inn Qinhuangdao, the Crowne Plaza Qingdao, Crowne Plaza / Holiday Inn Zhengzhou China, the Sheraton Great Wall Beijing  in China  and in Australia the  Sheraton Towers Melbourne  and the Sheraton Sydney Airport  Hotels, to name a few. He is also  Vice Conseiller Culinaire of the Chaîne des Rôtisseurs Gold Coast.

Oliver has run international judging competitions, and he can boast an impressive number of awards himself  from Excellence Awards in  hospitality to top culinary awards for  Chinese Cuisine

What a life changing move,  Oliver has made.  He has to adjust from running large restaurant operations, managing dozens of chefs, overseeing the successful operations for multiple venues and diverse menus,  to actually creating himself and cooking at a serene spiritual place high up in the hills of the Gold Coast Hinterland.

At present, Oliver and his staff are operating out of a “home style” kitchen at Peppers Ruffles Lodge & Spa, Gold Coast. However, they are creating the most amazing culinary delights, dedicated to making the menu an unforgettable, complete dining experience. 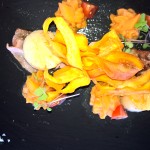 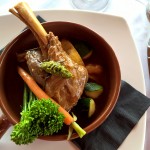 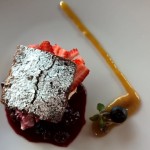 Oliver is currently creating the new winter menu including only hand-picked fresh produce and ingredients from the volcanic soils of the Hinterland region. His inspiration comes from the charmed surroundings and the magnificent view over the Gold Coast and the hinterland. 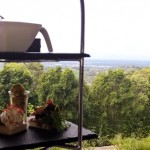 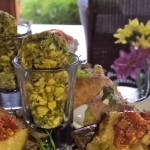 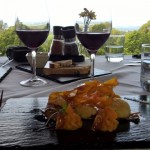 Oliver is excited about the next challenge; he is in charge of the design of a brand new efficient and practical kitchen for the resort, choosing the best equipment for top functionality. This is part of the resorts overall, exciting renovation and redecoration plan.

ground”,  is the VUE 175 Restaurant at Peppers Ruffles Lodge & Spa, Willow Vale, Gold Coast.
Vue 175 Restaurant is high up in the Gold  Hinterland, 175 metres above sea level,  with panoramic views all the way to the Pacific Ocean from Coomera to Coolangatta.

To get here and to enjoy Oliver’s gourmet delights, you  Travel up a charming, winding private road in Willow Vale to the ridge top Restaurant; just push the bell at the (security) gate to heaven and in you go.