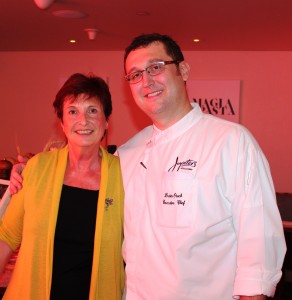 Executive Chef Dustin Osuch, oversees all kitchen operations at Jupiters, including seven restaurants ranging from casual to fine dining, banquets, pastry and one of the largest production kitchens in the southern hemisphere.

He is leading a culinary team of 150 chefs, a mammoth management task. What an amazing workload and he’s still smiling and taking his time to talk to me.

Initially, Dustin wanted to be a pilot, but was told that he was colour deficient. It must have been hard to write off his dream, but luckily, he found his calling as a chef.

Before Dustin joined Jupiters culinary team, he did a five-year stint as Executive Chef at The Mansion, MGM Grand’s most prestigious hotel designed to cater for the group’s highest profile guests. In this role, he worked alongside the highly acclaimed, award-winning Chef Joel Robuchon and Chinese culinary master Chef Pui Wing Hui. Dustin remembers too many good stories from that time, but they, unfortunately, can’t be shared –they’re not fit for publication.

From chef Joel Robuchon, he learned his strong techniques and the aim to achieve total consistency with his creations. In his kitchen, the master demanded all ingredients to be weighed meticulously. Joel has a unique super palate and can detect the slightest variation in a dish, be it salt, pepper, herbs or spices. 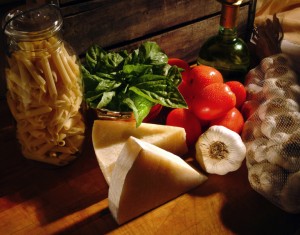 Dustin himself is strongly influenced by the Master and is very much technique driven. He uses only natural and seasonal flavours which he selects from the market place himself.

With his creative vision, Dustin develops the recipes and  guides his many chefs to prepare the dishes. They will experiment, taste, cook, reassess, cook, until the dish is perfect. It takes Dustin and his team approximately 12 weeks to change the menu. 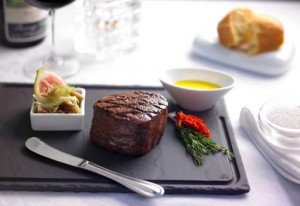 One of the signature dishes I tasted at entwine’s,  was the famous Cabassi Tenderloin – 600 day grain fed pure-bred Wagyu  Tenderloin from  the Cabassi & Co farm. It’s known as the “butter knife steak”. It is so tender it can be cut with a butter knife. Its tenderness is unrivalled by any other steak I have ever tasted.

The chef’s choice for a wine that complements such an outstanding steak was the McLaren Vale Shiraz, Grey Label.  The distinctive Wolf Blass style wine, with its deep flavoured, generous, yet elegant structure, pairs well with meat.

Another  dish I thoroughly enjoyed at OsterioVivo,  was the fabulous  Mushroom Risotto. Dustin has agreed to share his recipe and his  secret of cooking “the perfect risotto”.